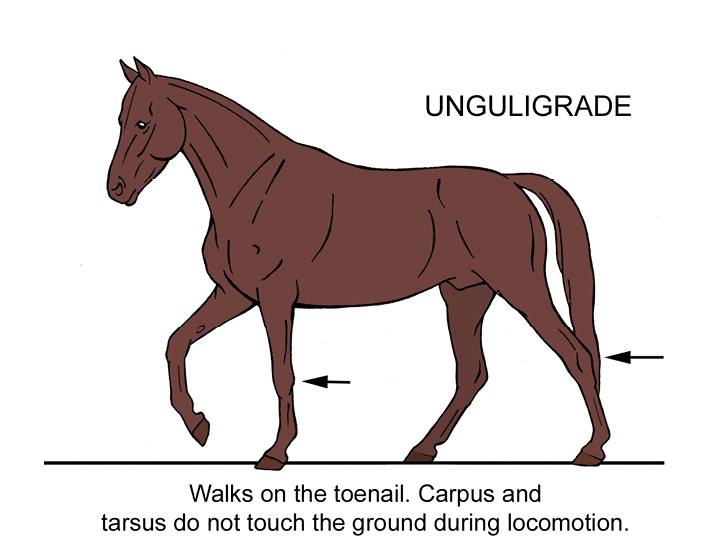 By Deb Bennett posted on November 6, 2019 | Posted in Anatomy

In this second in a series, Dr. Deb Bennet continues a discussion of the horse’s forefoot becoming a single digit.

In the first installment of this series on the anatomy and function of the forelimb reciprocating apparatus in horses (September/October 2019 American Farriers Journal), I discussed the many differences between white vs. yellow ligament tissue. In this installment, we focus on the relationships between muscles, the tendons of muscles, and yellow ligaments.

When Mr. Spock from the Star Trek series gives the Vulcan sign for “live long and prosper” by making a “V” between his middle and ring fingers, he’s using muscles (the interossei and lumbricales) that anchor between the metacarpal (palmar) bones. Although their fossil ancestors once possessed the full complement of five digits as we humans do, our modern horse, belonging to the genus Equus, possesses but one digit per limb — that’s one shy of what would be needed to make a “V.”

If you want to follow up in more depth concerning the evolution of the horse, please go to Dr. Bennett’s Equine Studies…

Premium content is for our Digital-only and Premium subscribers. A Print-only subscription doesn't qualify. Please purchase/upgrade a subscription with the Digital product to get access to all American Farriers Journal content and archives online.
KEYWORDS anatomy and shoeing does the horse have more than one digit Equine Anatomy the horse’s hand

Equine Reciprocating Systems: Do You Know the Nuts and Bolts of the “Orthopedic Trim?”