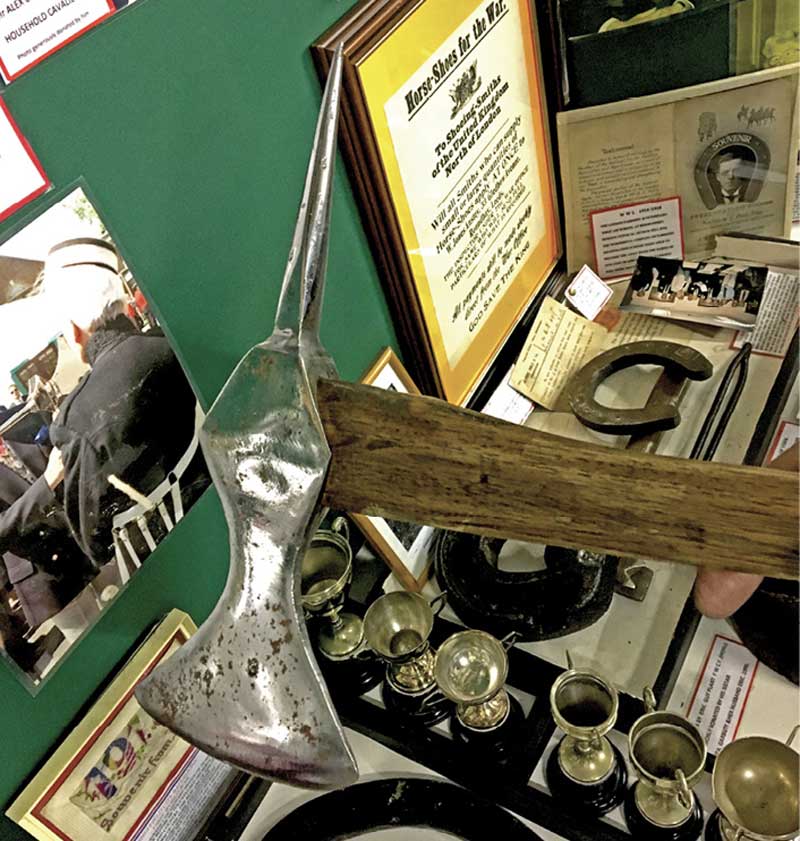 Scientific study is measuring the effectiveness of anecdotal traditions

Pictured Above: The expression “no hoof, no horse” comes from the cavalry when a soldier was required to present his deceased horse’s hoof to receive a new one. The soldiers would have this axe in their possession to carry out that duty. The axe is part of Douglas Bradbury’s collection at the United Kingdom Horseshoeing Museum in Derbyshire, England.

No foot, no horse.” What does that mean?

Originally, it came from the cavalry. A soldier needed the hoof of his deceased horse in order to receive a new one. Today, however, the expression has come to emphasize the importance of caring for our horses’ hooves.

It has been widely documented that shoeing has a direct effect on the musculoskeletal system of the horse.1

Until recently, farriery has been based on tradition, anecdotal evidence and personal experience. With the introduction of objective locomotion assessment and, importantly, pressure plate systems, a new revolution of evidence-based farriery research is taking place.2

Scientific study of the relationship between hoof balance and the wider musculoskeletal system is still in its infancy. However, with the expression that began this article, it’s…

Premium content is for our Digital-only and Premium subscribers. A Print-only subscription doesn't qualify. Please purchase/upgrade a subscription with the Digital product to get access to all American Farriers Journal content and archives online.
KEYWORDS evidence-based farriery force of impact on the equine hoof subjective nature of hoof balance By Yogi Sharp, DipWCF, a farrier based in Brighton, England, studies the relationships and effects that hoof care has on the rest of the equine body.

Quantifying the Hoof in Support of Evidence-Based Farriery