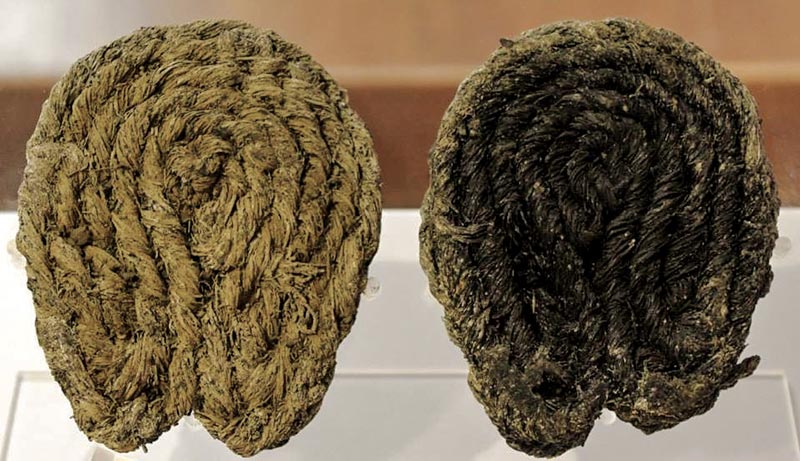 Long before the widespread practice of nailing metal horseshoes onto hooves, horsemen used hipposandals that closely resembled what people were wearing on their own feet in the thousands of years before the Common Era. Hipposandals were made of a plant-based material, often from the plant Spartium, and were woven into ropes that were then wound into sandals. In Japan, these sandals are called waraji and are still worn by people today.

Instead of nailing these shoes to the hoof, they were often tied around the fetlock joint, just above the coronary band. The hipposandals were designed for easy removal. If more support was necessary, horsemen added bronze or iron plates in between the sole and the shoe.

Sometimes, the hipposandal was used to soothe worn out hooves, not prevent damage. Ancient veterinarians have written about soaking the hoof in water that mallow root or Althaea root had been boiled in, trimming the hoof, then wrapping the hoof in one of these hipposandals with the addition of garlic or axle grease.

The shoes pictured are rare hipposandals found in the Herculaneum Ruins. What makes them rare is that their material doesn’t allow for well-preservation. Most hipposandals from ancient times made of rope or plant material have disintegrated long before possible discovery.

SOURCE: Clark, Bracy. (1831). On the Usages of the Ancients Shoeing the Horse.

Do you have a shoe or tool that you’d…

Premium content is for our Digital-only and Premium subscribers. A Print-only subscription doesn't qualify. Please purchase/upgrade a subscription with the Digital product to get access to all American Farriers Journal content and archives online.
KEYWORDS ancient times Herculaneum Ruins hipposandals horseshoes rare horseshoes