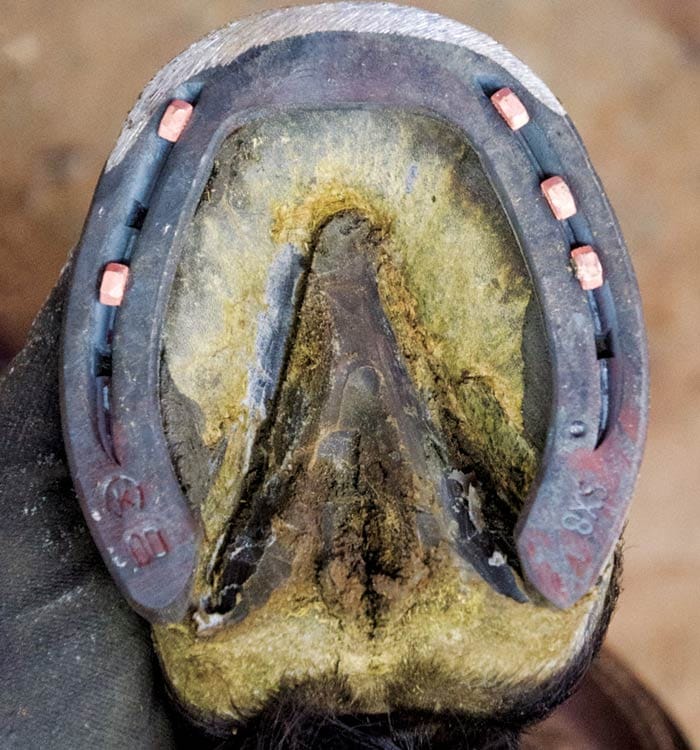 By Brian Hampson and John Wilson posted on October 30, 2018 | Posted in Shoeing

A new scientific study finds less microbial damage with their use

Despite limited evidence of their effectiveness for reducing bacterial invasion, copper-coated steel horseshoe nails have become more common among farriers. We now have good scientific evidence to support their use after a study, recently published in the Journal of Equine Veterinary Science, found that copper-coated nails resulted in less microbial damage to the surrounding hoof tissue than conventional steel nails.

Copper has been used as an antibacterial agent for centuries and has recently gained mainstream support in medicine as a first line of defense against multi-resistant bacteria. Copper is used on surgical surfaces and has been impregnated into surgical drapes and gowns to control bacteria.1 It is also used in food preparation surfaces. Copper ions destroy the bacterial cell wall and penetrate into the bacteria, causing degeneration and death of all bacteria that comes in contact.2

Studies have suggested that nail holes allow bacterial migration proximally from the ground-bearing surface to enter deeper into the hoof wall. Horseshoe nails also increase shearing stress in the wall surrounding the nail holes. Traditional horseshoe nails are made of steel, which offers no antibacterial qualities. Brian Hampson is with Sunshine Coast Podiatry Services in Valdora, Queensland. He completed a PhD in 2011, specializing in the feet of feral and wild horses. He works part-time as a farrier and continues to conduct hoof research. He has had 18 peer-reviewed papers published in the veterinary science literature.

John Wilson is with John Wilson Farriery Service in Doonan, Queensland. He is a very experienced farrier and a former competition forger. Wilson is interested in furthering our knowledge in everyday farriery. His next project is to investigate the possibilities of horseshoes containing copper.

How Do Adhesives Affect Hoof Wall?

Stabilizing the Hoof Wall After Resection