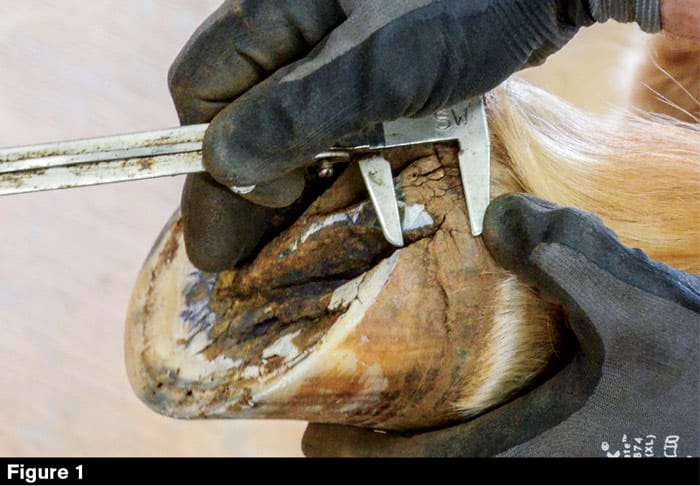 By Jeff Cota posted on October 29, 2018 | Posted in Therapeutic Shoeing

Reducing tension on the injured soft tissue is vital in rehabilitation

Shane Westman rarely sees healthy feet anymore, and he wouldn’t have it any other way.

It’s been 2 years since the Bow, Wash., native joined the William R. Pritchard Veterinary Teaching Hospital on the University of California, Davis campus, and his enthusiasm for helping horses has never been higher. Maribelle’s case is a good example.

The 11-year-old Haflinger mare was presented to veterinarians at the UC Davis Equine Surgery and Lameness Service on Nov. 21, 2017, for a lameness evaluation. Maribelle became acutely lame after a 3-hour hilly trail ride 5½ weeks earlier.

During the initial lameness exam, the mare’s left front was graded as a 2-out-of-5 on the American Association of Equine Practitioners (AAEP) lameness scale and 3-out-of-5 on a circle. She was worse to the left than the right.

Like humans, all horses react or compensate for lameness differently.

“Experienced riders may detect minor alterations in gait before they are apparent to an observer,” according to the AAEP. “Lameness may appear as a subtle shortening of the…

Premium content is for our Digital-only and Premium subscribers. A Print-only subscription doesn't qualify. Please purchase/upgrade a subscription with the Digital product to get access to all American Farriers Journal content and archives online.
KEYWORDS AAEP lameness scale reducing tension on the collateral ligament shoeing collateral ligament injuries

Shoeing For Tendon And Ligament Injuries