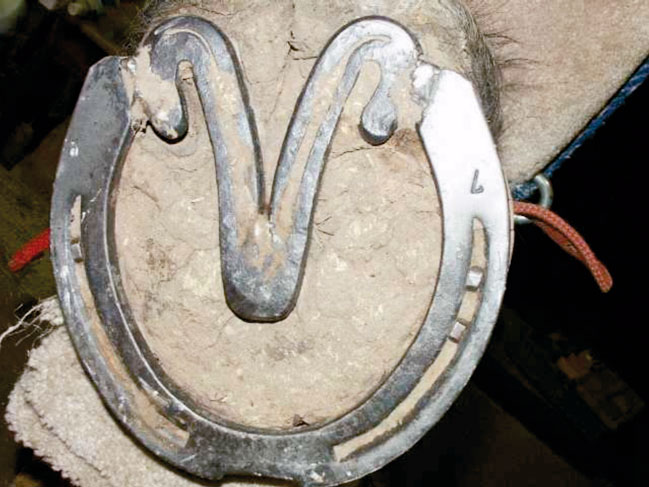 By Stephen Wisnieski posted on December 1, 2007 | Posted in Diseases

FIRST LOOK. When farrier Steve Wisnieski was first called in on this white line case, Samson, a 6-year-old Percheron gelding, was shod with a hand-made heart bar shoe with a nail in each heel and a wood screw in the toe.

Samson is a 6-year-old Percheron gelding. He stands approximately 17.2 hands and weighs about 1,700 lbs. Prior to this incident of white line disease (WLD), he had been a perfectly healthy horse and had been under my care as both a trainer and farrier.

Other than when he was in training and being shown, he has been barefoot. His owner moved farther away and began using a local farrier in her new area.

When Samson contracted WLD, she brought him to me for further treatment.

WLD is a bacterial/fungal infection of the hoof. To understand this, we must first understand the basic physical layout of the equine hoof.

The hoof wall is comprised of three layers: stratum externum, stratum medium and stratum internum. The stratum externum is the shiny outer hoof wall that we see. It is a (relatively) thin layer of cells. The next layer, stratum medium, consists of horn tubules and intertubular horn. It makes up the bulk of the hoof wall. Finally, the innermost section, stratum internum, is the non-pigmented section that attaches the hoof wall to the third distal phalanx (coffin bone or P3).

No Single Cause For White Line Disease