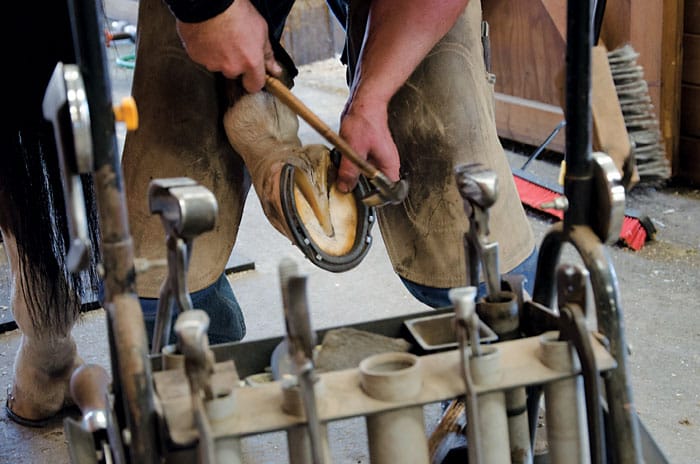 By Jeff Cota posted on September 4, 2018 | Posted in Business Practices

Pictured Above: The next Model Veterinary Practice Act will contain the farrier exemption from the definition of practicing veterinary medicine, according to an official with the American Veterinary Medical Association.

A controversial proposal to eliminate the farriery exemption from the Model Veterinary Practice Act (MVPA) has been shelved by an American Veterinary Medical Associa­tion (AVMA) working group.

“The current version that’s going to be reviewed by the AVMA Board of Directors in September does contain the farrier exemption, just as previous versions of the Model Veterinary Practice Act have,” Michael San Filippo, the AVMA’s senior media relations specialist, told American Farriers Journal. “The proposed changes in regard to farriery have been dropped.”

The AVMA working group’s decision comes after a swift and unfavorable response to its proposal.

“It became apparent very quickly from numerous comments received (mostly from the farrier community) that there was a significant misunderstanding as to why the exemption was proposed to be removed,” San Filippo says.

According to an American Farriers Journal survey, 82% of farriers op­posed the elimination of the farriery…

Premium content is for our Digital-only and Premium subscribers. A Print-only subscription doesn't qualify. Please purchase/upgrade a subscription with the Digital product to get access to all American Farriers Journal content and archives online.
KEYWORDS American Veterinary Medical Association Model Veterinary Practice Act definition of practice of veterinary medicine removing the farrier exemption