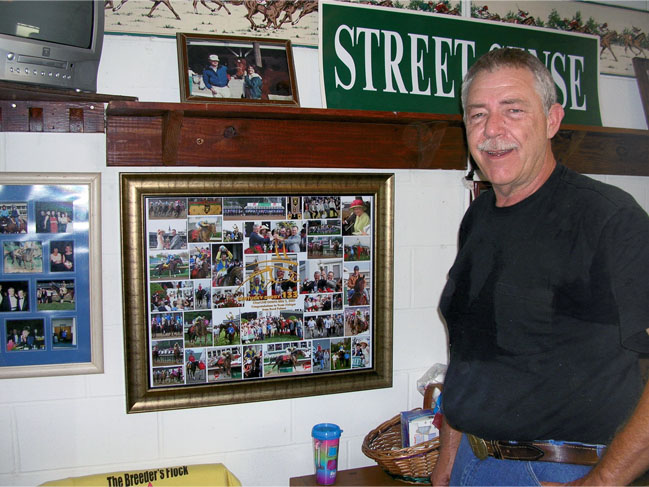 Shoeing Only for One Client

After 39 years of shoeing, this Kentucky farrier now works only for one trainer, but it’s a role that has included handling the footwork on two Kentucky Derby winners

DERBY WINNER. Richard McChesney is shown in trainer Carl Nafzger’s office standing next to a Street Sense Kentucky Derby collage. The 39-year veteran farrier handles the footcare work on all 60 of this client’s racing and training horses, including “The Big Horse,” McChesney’s moniker for Street Sense.

In the furthest corner of the Churchill Downs’ backstretch, in a barn that practically sits in the front yards of the bungalows lining Louisville’s Longfield Avenue, a farrier crouches under a nervous Thoroughbred filly. Richard McChesney is blissfully indifferent to the swirl of technological change around him as he tacks on a shoe.

It’s just another day in the life of the Mt. Sterling, Ky., farrier who does the shoeing work on 2007 Kentucky Derby winner Street Sense for trainer Carl Nafzger.

McChesney also shod 1990 Derby winner Unbridled in the two decades he has worked for Nafzger. Now in his 39th year as a farrier, McChesney has phased down his operation after also working afternoons for a number of years as the paddock farrier at Churchill Downs. He now looks after only the shoeing needs of Nafzger’s stable of 60 horses.

“It’s a miracle that we’ve worked together this long,” he says. “Nafzger tells me to do whatever I want with the horses now.”

Tips For Shoeing The Young Or Inexperienced Horse