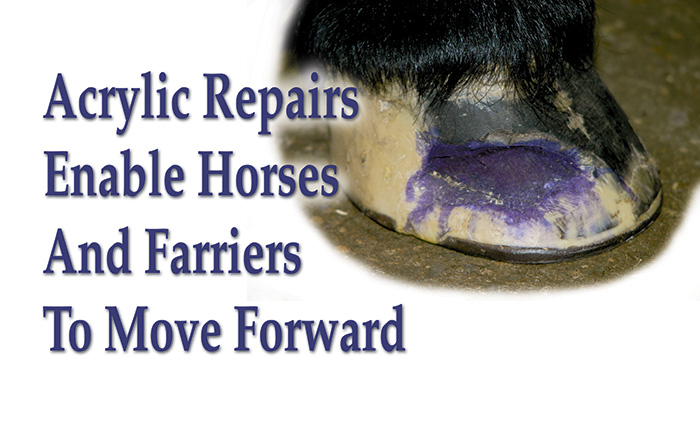 By Ron Perszewski posted on September 1, 2007 | Posted in Shoeing

THE FIRST TAKE. This horse, Zena, is being treated for white line disease that claimed large portions of the hoof wall. This is what the hoof looked life just before a second shoeing and acrylic repair effort by farrier Red Renchin. Note the area not covered by acrylic, which was left open to the air and treated with thrush medication.

If you’re ready to move your career beyond basic trimming and shoeing, the next step might be using acrylic glues to repair damaged or low-quality hooves. “Being able to perform acrylic repairs makes a farrier appear more professional in the eyes of clients. If the horse has a problem, you can become the problem-solver,” says International Horseshoeing Hall Of Fame member Red Renchin.

Any shoer willing to learn could soon be using acrylics for jobs such as repairing quarter cracks or shoeing thin-walled hooves. “It’s just a matter of having a basic understanding of the process, and then doing it step by step. It’s not complicated at all,” says Renchin, who uses acrylics almost daily in his Mequon, Wis., business.

That basic understanding, he says, begins with knowing that there are two fundamental reasons for using acrylics: