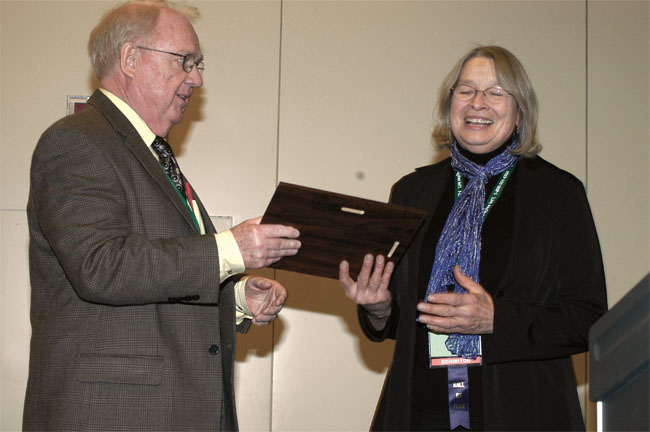 By Toby Raymond posted on March 1, 2009 | Posted in Business Practices

Allie Hayes, the first woman voted into the International Hall Of Fame, received her plaque and congratulations from Frank Lessiter, editor/publisher of American Farriers Journal, during the International Hoof-Care Summit in Cincinnati, Ohio.

The five members of the Class of 2009 were honored for their work on behalf of horses, horse owners and the hoof-care community.

Frank Lessiter, editor/publisher of the American Farriers Journal, which sponsors the International Hoof-Care Summit, congratulated this year’s inductees for careers he characterized as “inspirational and impassioned, and which have had a significant impact on elevating the level of hoof health, care and management.”

Donald Walsh’s career changed when he encountered a series of particularly devastating laminitis cases after he’d already been operating the Homestead Equine Hospital for 14 years.

“As a doctor of veterinary medicine with a pledge to alleviate suffering, I felt helpless to ease the pain caused by this debilitating disease,” recalls the 1969 graduate of the University of Missouri School of Veterinary Medicine. “That’s when I became intent on discovering the underlying causes as a first step toward implementing an effective…

Check Out 61 “Best Of The Best” Shoeing Ideas