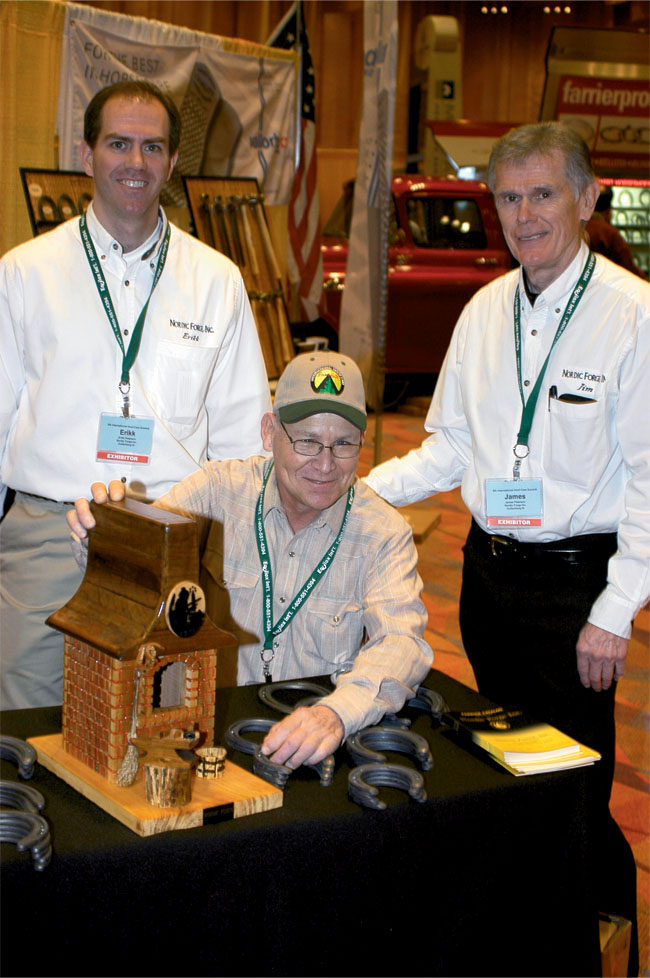 Houses for the Birds, but with Horseshoers in Mind

By Pat Tearney posted on March 1, 2008 | Posted in Education

Ron Dash (center) with one of his horseshoe-themed birdhouses. With Sharp are Erikk, left, and James Peterson of Nordic Forge in Guttenberg, Iowa. This birdhouse was on display at the Nordic Forge booth at the International Hoof-Care Summit.

Among the items up for bid during the American Farrier’s Association Auction were a couple of birdhouses that are as likely to attract horseshoers as they are feathered occupants.

The birdhouses are the creations of Ron Dash, a farrier from Hohenwald, Tenn., who had to give up his shoeing business following a bad accident several years ago.

Dash, who did his shoeing in the Orlando, Fla., area, was kicked by a horse and struck his head. For a while, he was totally blind. He has since recovered some vision.

While his health problems have kept him from shoeing horses, Dash had been using his handiwork to make birdhouses and other craft items. He was a skilled woodworker even before the accident, making handmade furniture in his Florida shop.

Three of Dash’s birdhouses were on display in the Marketplace at the International Hoof-Care Summit, two in the AFA booth and a third at the Nordic Forge booth.